Update on Mario Through the Ages

Okay, pun intended here, but it's been ages since I've worked on this project. And even longer since I've posted anything about it. The last post I put up on here was May 29, 2018 which was my third week of working on this project. For grins and giggles, let's say that I started this project on May 4, 2018. That makes today day number 335 of this project. And frankly, I'm pretty okay with that because I'd say that I'm about 35-40% of the way done with this piece. I don't work very fast on my cross stitch, so 35-40% is just fine with me.

In this post I don't have a full-piece progress picture, but I should have one posted soon. It's silly because for me the biggest change that I'm noticing is that I've changed my needle minder out, but in reality the progress that's been made on this piece is enormous. I've almost finished four complete pages with just Mario aspects left to stitch (the hard parts, of course!) The filler parts I've been knocking out on my breaks at work which is the progress that's in the picture below.

More soon. In the meantime, enjoy!

So, I feel like a bit of background is needed on this one in order for it to make absolutely any sense whatsoever. I follow a band called Planet Booty and I've been a really big fan since July of last year. So much so that I actually just finished seeing them five times this month during their Southwest tour with TWRP. (It was a blast and if you ever get the chance to see either of them, you should.) But I digress.

The point is, I'm a big fan and there is a large community of other fans like me that are all over Twitter and Instragram. We're like a family. There's this girl named Katie who does perler bead art that actually made a perler bead version of Planet Booty's Booty. It immediately called to me. I had to cross stitch it. So I reached out to her and she very kindly made a pattern for me.

Originally, I followed the pattern exactly, but the perler design didn't translate to cross stitch the same way, so I ended up tearing everything out and starting over with metallic silver thread. Now, I'd never used this stuff before and I likely never will again. It is an absolute PAIN to work with. It splits and it frays and it hates me despite all the tricks I looked up online and tried to make work for me. My piece ended up a mess, but I'm still happy that I made myself a Booty. I have one now and I never have to make another one again!

I probably wouldn't have it done today, though, if it weren't for Josh Cantero's birthday. He's one of the Planet Booty band members and an absolute sweetheart. If you get to meet him, I almost guarantee that you'll get a hug. My point, though, is that with today being his birthday, I finally got motivated to finish the Booty and post it online to say happy birthday. Since I can't draw and I can't paint and XC is one of my main creative outlets, that's how I decided to show my appreciation. He liked my post, so hopefully he actually liked it, but it's the thought that counts, right? Here's what the Booty turned out like along with a few pictures of Josh from PB's NYE concert. Let me know if you have any suggestions on using metallic thread. Any and all help would be appreciated for the future. 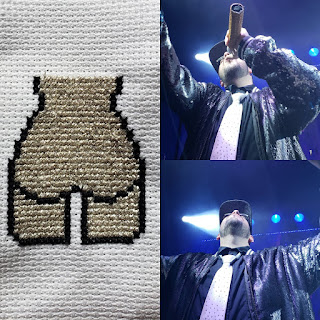 A dear friend of ours just had a birthday on Friday. (Happy birthday, A!) And true to tradition, I made her a birthday card. This one I had a specific idea in mind going into it which was nice, but what made me really happy about the whole thing is that I was able to use a lot of scrap paper. (I have a ton and it really needs parring down.) This little card is by no means perfect, but the recipient loved it and that's all that matters. Hope you like it, too! 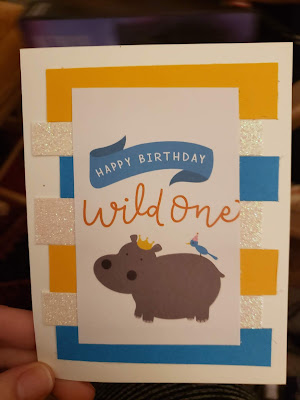 Crafting for a Cause

Until about two weeks ago, I'd never crocheted for charity before, but I came across a post on reddit that just broke my heart and I felt compelled to help out the person who posted. Her friend's mom was recently diagnosed with cancer for the fourth time. To try and give her some strength and love, the poster, u/tryingforadinosaur, asked the r/crochet community to send her granny squares so that she can make a blanket for her friend's mom.

Since I got all of Sharon's yarn stash in December, I haven't really known what to do with most of the yarn since there's only one or two skeins of each color. This project was perfect, though, because I didn't need much yarn for each square and it allowed me to destash some in the process.

In all honestly, I intended to take pictures of all the finished squares before I packaged them and sent them off to Utah, but somehow I forgot and here we are. My best guess is that I sent something like twenty or more squares off to u/tryingforadinosaur and I'm really proud of myself for being involved with this project. I mean, don't get me wrong, it's not like I'm pounding my chest and yelling about it from the mountain tops, but I do feel good about the entire thing and I really hope that she gets enough squares to make her friend's blanket. It'd be great if she could send us pictures of it when she gets done, but I'm not sure that that will happen and thusly I'm not getting my hopes up. Either way, all is well and I was glad to be a part of the process.
Posted by Tyler at 12:00 PM 2 comments:

The Scrapghan is Making a Come Back!

I started going back to my knit and crochet group about a month ago and since then I've been crocheting nearly everyday (meaning that my cross stitches and cards have taken a back seat, but whatever.)

As a result of all this crocheting, I've been going through a lot of the scrap yarn that was given to me by a coworker before she retired. Truth be told, I'm still trying to get through it all to untangle and organize it, but I'm most of the way done and I've been crocheting up granny squares and granny's daughter squares (GDs) like a fiend. The extra scraps that are six inches long or more but aren't long enough to become GDs are then put into my scrap yarn container to be tied together later and added to my super scrapghan. 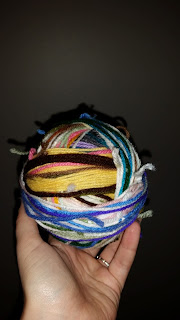 This is what the balls look like when I have enough to wind together and add to my blanket. I intentionally leave the knot tails wild so that they stick out all over the place as I crochet. The effect is pretty cool and I love the fact that this blanket will truly be one of a kind. The yarn has come from previous projects and friends and there's tons of memories interwoven with the yarn.

Off and on, I've been working on my scrapghan since January 2012. The project gets worked on when I'm actively crocheting, but until recently I haven't really been working on projects. With me going back to Sassy Stitchers, though, progress is imminent on this project. This last ball that I added made the blanket at least four inches longer and I'm over half way done with the entire thing, so I'm pretty happy with it all. Now if I can just get all my UFOs done and make space in my craft area for different things other than yarn, I will be very, very happy.


Link to my Scrapghan project entry on Ravelry
Posted by Tyler at 1:13 PM 1 comment:

This year is flying by and I have no idea where it's going. And while I'm not sure that I've really accomplished anything significant over the last several months, I have been crafting.

At the end of June, I got a Sizzix die cutting machine to use with my thin cuts and I've been absolutely having a blast with it. My first projects were to make birthday cards for my grandmother and my husband. Gran got unicorns and Hubby got adorable cacti (and both loved their cards!) Pictures are below. Stamps and thin cuts came from Close to My Heart (great products!) 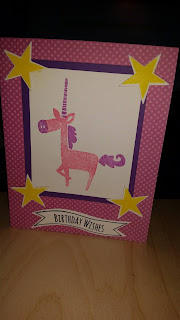 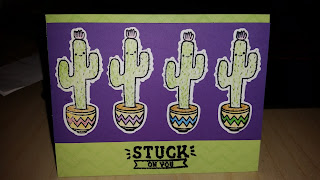 Ah! How have I already been working on this for three weeks! Time is flying and I have no idea where it's running off to. Things are really progressing on this piece which is really making me happy. The long weekend was good to me and I was able to get both Tanooki Mario and Frog Mario completed. (Frog Mario was a PITA, though. My god...)

I think last week I had set a goal to finish Baby Mario, as well, over the weekend, but by the time I'd finished Frog Mario I was grumpy and pretty tired of looking at cross stitch for the weekend. So, he didn't get done and I probably won't work on him for a few weeks. I'll do him later on down the road when I'm feeling more animated to work on something more difficult. For now, I'm going to do fill work to my heart's content or I know 100% that I'll burn out and put everything aside indefinitely.

My goals for this next week are to get the dirt section of this piece completed by the end of the week. It's similar to the water in that all the stitching is pretty uniform and for that reason I think it'll stitch up pretty quickly. I just need to find something good on Amazon or Netflix to watch, though, or things might get monotonous. We'll see. Whatever happens happens--I don't need to get super hard on myself for not meeting trifling goals.

Fun Fact: I have put the blunt end of an embroidery needle through my right thumb two times now!
Posted by Tyler at 4:47 PM No comments: